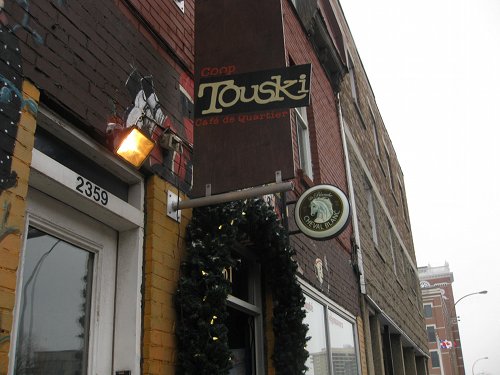 The 411 Just recently I was presented with a scheduling challenge. Find a spot on the South Shore or close to the Jacques Cartier bridge so one of our friends could make it to his appointment after brunch and do so rather quickly. I did not feel like going down to the South Shore, so I had to find something somewhat close to the bridge. Now, I had to dig deep into my brunch map and look at an area I almost never frequent. What I found was Touski Café and Coop. I have no clue how Touski Café Coop came on my list but we were curious, hungry and on a timeline so it was decided.

Touski Café is east of Papineau on Ontario street. It’s in an area I am almost never visiting. I would say it’s my reviewing black hole, but when you make it here you notice a rather large spot that has areas broken down into rooms with quite the eclectic community feel. There are interesting art on the walls, an old school sofa, board games, and a kind of kids room. The interior is rather well lit with large windows and an old church pew seat near the west most end of the restaurant. The fact that it’s a coop is kind of cool and they also have lots of community events promoted inside.

The menu is pretty broad and the main dishes come with coffee and free refills. On average, no dish really costs more than $12 and what is refreshing is that you have some dishes that are in the $6 area that are a full plate so that is really good value. Some items come with an option of a side dish, so you would get something like a 2-egg dish which comes with potato, coffee, one of 8 sides ranging from bacon, cretons, and even vege pâté. Most dishes also come with bread on the side and the bread is a choice between baguette, white, brown, or for 1$ extra, a bagel.

They also have this section called “le gros Chang” which are large filling dishes kind of like a lumberjack dish and the prices weigh in between $10-$12 with coffee included. In case you were wondering where Chang comes from, it’s actually named after someone they knew and was known for eating large portions. If the gros Chang isn’t your style and you like healthy they also have a health section in a similar range with coffee, so you can cover a vast spectrum of food in their menu. The menu looks something like this:

First up on the lineup was a spinach and goat cheese omelette ($8.50) which came with a side of potatoes, fruit, and bread and we opted to use the baguette bread. The omelette was quite large so you got something quite substantial on your plate. In fact, the bread is almost dwarfed by the omelette which is nice to see since often omelettes tend to be skimpy. The mix of goat cheese and spinach is a success and on first bite, we were sold.

The Gros Chang ($12) was a must have weighing in with two eggs, bacon, sausage, French toast, and a bagel with cream cheese. The meat selection is generous and tasty and the French toast has a whole grain taste to it which is different from what you normally find. This massive dish will fill even the hungriest of appetites. It is loaded with food and even comes with coffee so it gets you all the classic morning dishes on one plate for a decent price and a generous portion.

I ended up going for the eggs Benedict Florentine ($8.50) which is filled with spinach, ricotta, and parmesan cheese. It is also accompanied by potatoes and fruit. The spinach and ricotta really stood out in a complimentary way. The spinach almost tasted creamy. The parmesean was not really pronounced which is good since the salty and powerful nature of that cheese would have taken away from the beauty that was the spinach and ricotta mix. The potatoes on the side were disappointing although the fruit was shocking as there was so little of it. The pieces we got were sad and lonely. I mean, I got five individual grapes; that’s almost nothing.

We also managed to squeeze in a health dish of yogourt and homemade granola ($10.50). This dish is a yogourt in a glass with warm fruit coolis and topped with homemade granola, and loads of fruit on the side. The pieces of granola are quite large and remind me of a bird seed concoction, a very natural option. The dish was visually impressive and packed an amazing taste. The fruit selection also was generous and impressive. The price point is also fair considering you do get coffee with this.

Service was good and our waitress explained the concept of Chang and how the coop worked on a whole. Our coffee refills were ok although at some point they were getting slower and I kept having to ask for more milk and cream.

There are lots of vegetarian options as well as healthy ones as the health menu had around 5 items to choose. There are no real vegan dishes and I do not see many gluten free items besides the fruit cup.

On the plus side, Trouski café has affordable prices, large portions, tasty selections and creative dishes. On the negative, the potatoes were not impressive and the fruit selection on my dish was weak although the fruit selection on the granola and yogourt was very generous. I would recommend it especially for the healthy options if you live in the area.