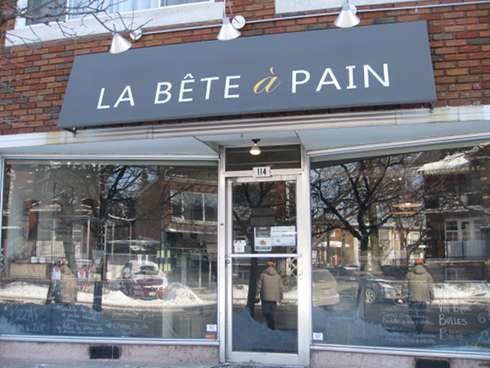 Over on Fleury street is La Bête à Pain – a bakery with a twist and making a name for itself among foodies as having an impressive brunch. This came on my radar a while ago but since it’s in an area I don’t end up in often, it took a while before I made it up here. There aren’t too many brunch spots up on Fleury, let alone many fancy ones, but the area is changing and in a few years you may not even recognize it from how it is now. Already, signs of gentrification are beginning, so let’s see how this shapes up. 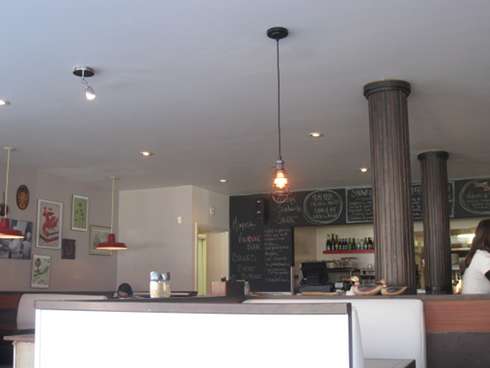 There’s been a positive buzz about the Bête a pain brunch; people rave about the food and when you walk in you get a hint about why when you see the produce they have in their fridges to be purchased. I can see myself making a quick stop over for some bread and some of their prepared meats. Without a doubt, this part definitely impressive. Brunch starts at 10:30 and if you even show up before you cannot get it – you have to order some other smaller items. It’s a set menu so I guess they need to prep everything but I find that rule a little frustrating and maybe making that start time a little earlier or allowing reservations would help in alleviating some of that frustration. 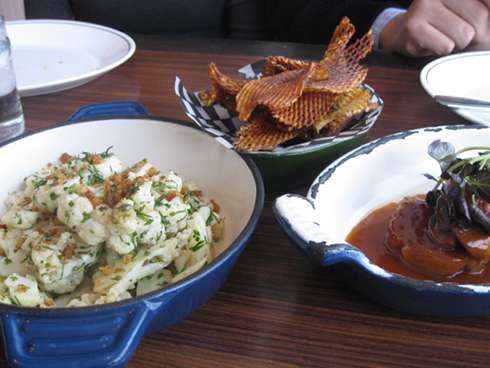 Food The menu is set but you can buy some stuff on the side like croissants and a few other items but the brunch menu on our visit was 6 courses at $22. It did not come included with coffee and there are no refills or drip coffee for that matter. Coffee will run you around $3 and mimosas are $7. The brunch service starts at 10:30 and ends at 2pm so should you come earlier than 10:30 you need to wait although they will take your order. I should note that they do not take credit cards, so it is cash or debit. The menu also changes based on availability of ingredients so this review is a little dated since the menu has changed since we initially went. The 6 items on the menu were as follows: 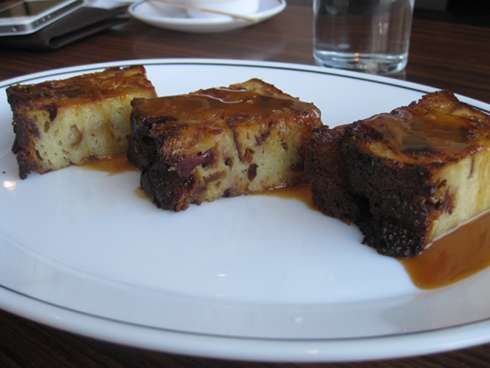 Our first course was the pain perdu which is often confused with french toast. Just to be clear, it is something different. We were 3 people and we received 3 portions – the size was small although the taste was large. It was moist and each bite was bursting with flavour. The only down side is that it was done in less than 2 bites. 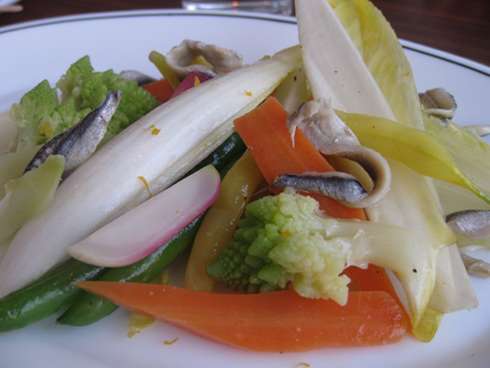 The pickled vegetables and anchovies, again, was not enormous but they did an impressive job on taking a seemingly plain dish and delivering some solid taste. The anchovies, although an unorthodox choice, worked incredibly well in this dish and it was polished quickly. 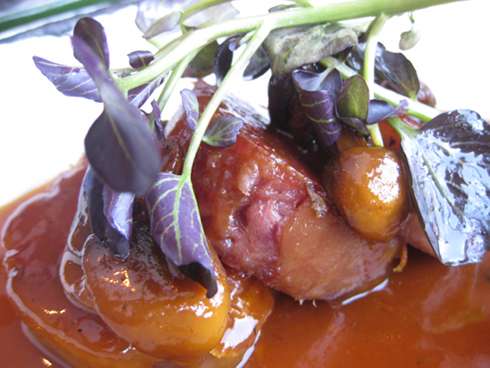 We were then served up 3 dishes together. A pork and mushroom dish; cauliflower vinaigrette, and potatoes. The pork and mushrooms dish was arguably the most impressive dish of the entire service – it was moist and almost fell apart. The mushrooms and sauce were perfect and the taste did not disappoint. The size on the other hand did because it was small. 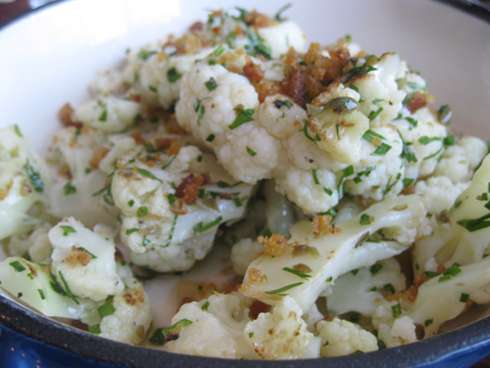 The cauliflower was more generous in size and, although another odd dish for brunch, we felt it went well with the pork and it is kind of healthy so it’s nice to see that on the menu. As an added bonus cauliflower is supposed to be the “new kale” now, so I kind of felt all foodie cutting edge-like. 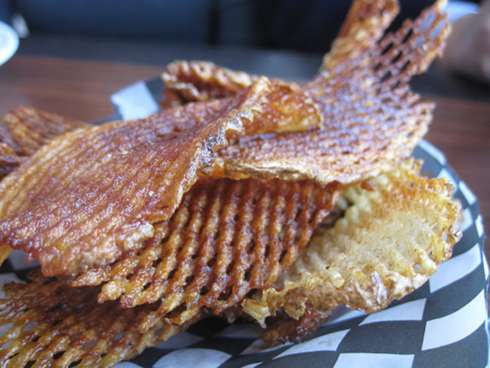 Now, the potatoes were very interesting and the only thing better than their solid taste was their presentation as they were crosscut in a kind of lattice style. They were light, full of taste and a joy to look at (just moments before they were devoured, that is). 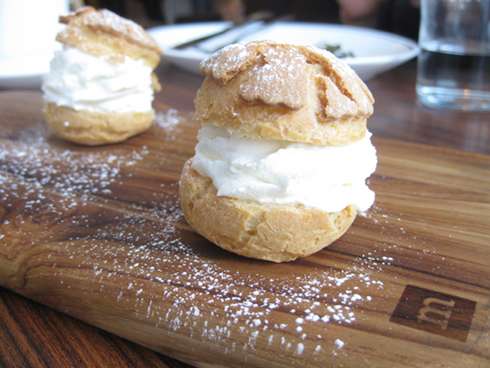 Lastly the dessert was cream filled pastry balls. The presentation was lovely being served on a cutting board and they were a nice way to end the service.

Service Normally, I have no issues with service. I’m easy going but here I have an issue and for more than 1 reason. Mainly, the 10:30 am rule is stupid, for lack of a better word. We showed up were told we would have to wait to get our brunch since it only starts at 10:30 but we could order some other stuff until brunch comes along. They did take our order, and said we would be served and could have a coffee and wait. Now, the only thing more ridiculous than this is that we got our food at 10:43 (yes I counted). The other issue that bothered me is that in between courses we waited quite some time. For a place that is so particular about starting at 10:30 you would figure they would be able to have enough food for all the people it could seat and get it to them on time and not make them wait in between services for too long (I should note it was maybe 70% capacity at this time). Lastly, the men’s room had open tiles on the side (was under repair) and the toilet was running (I fixed it since it drove me nuts). I did not take a photo of it because I felt that would have been excessive and kind of wrong. But if you push a reputation of class and superior service and charge more than your average brunch spot at least give us a proper experience not just a façade of looking good. While I’m complaining on bad business decisions, the no credit card thing is a pain and kind of cheap. I know they pay an extra fee to process credit card transactions but honestly, your average bill is over $20 a person. I think they can afford to take the hit and make the average client’s life a little more convenient.

Vegetarian There are some good vegetarian options and incredibly tasty ones. Because it’s a fixed menu you might not get each dish to be vegetarian friendly but most of what we ate was.

Wrap up This is the hardest part of the job. How do you reconcile such a roller coaster of an experience. I mean the food and technique were impressive. In terms of sheer taste, this was one of the tastiest and most impressive brunches I have had in a while. However, in terms of operations/service there are some serious short comings that need to be resolved – simple stuff that mom and pop operations are doing well and charging half the price. Now, I know I will be making some people angry with this opinion since there are some die hard fans but the way I see it is that if I am paying good money for brunch I better get a good experience and that doesn’t stop at the food.

View La Bête A Pain in a larger map