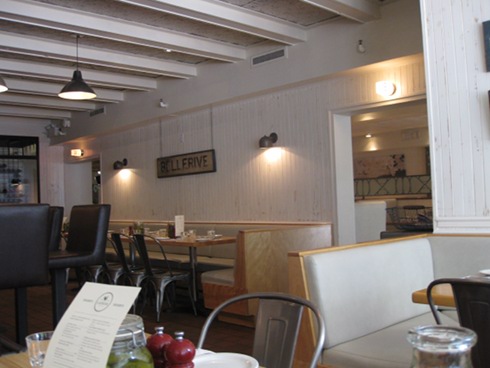 The 411 You may have heard about Laurier BBQ over the last year as the historic Montreal restaurant that worked with celebrity chef Gordon Ramsey to give one of the most hyped renovations in Montreal’s restaurant scene. The relations with the celebrity chef have since ended but did you know that Laurier BBQ now offers a brunch menu? This made us very curious – a place that was quite popular and known for BBQ chicken is now doing brunch? Part of me was intrigued to try it since I never have and the other part of me wanted to see how you marry rotisserie chicken and brunch since you rarely see something like this. 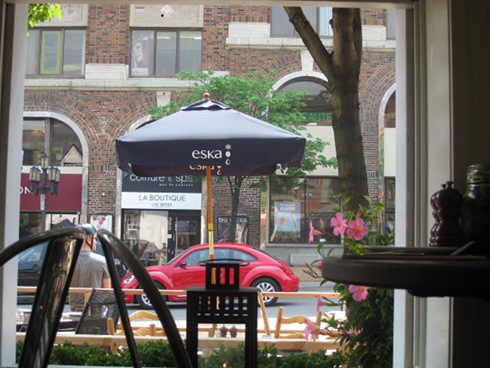 At 1st glance The venue is nice, no questions asked. I mean there is loads of space with nice windows shining light in and a wheelchair accessible washroom. There is also a terrace in the summer. The place has a décor that makes me think of Maine’s white painted wood with a distressed touch to it.

Food Every table has this giant jar of pickles on them. It’s a nice little touch especially for those who are pickle fans and why not? I mean, you have a giant jar of tasty free pickles in front of you so by all means indulge but just don’t spoil your appetite since you may miss out on some of these tasty dishes such as: : 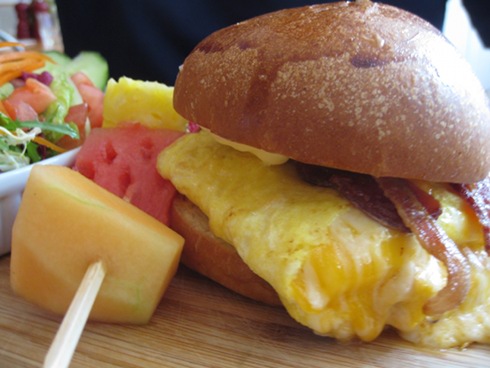 On average your dish will likely run a little over $12 and that number will climb when you add the coffee $3.25 which does not come with refills (even though it’s drip). My friend started off with the Laurier sandwich ($9) which includes eggs with cheddar, bacon and mayo served on a soft bread and a side of potatoes or salad. The bread in this dish was excellent with little to no crumbs. It was certainly tasty and held everything together. The amount of egg was very generous and the side of fruit was nice although the salad was uninspiring. The menu states potatoes in it and I don’t recall if my friend asked for an off menu substitution or if it was an option. 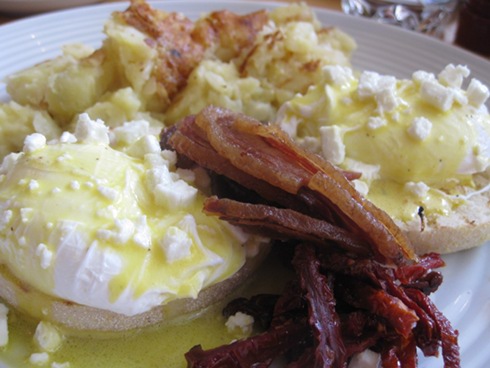 Naturally, I had to try their Laurier Benedict ($14) which is an English muffin topped with poached eggs and goat cheese, a subtle hollandaise sauce, sun dried tomatoes and a side of potatoes. This dish was quite filling the crumbled goat cheese looked good and tasted even better. The taste of the goat cheese really went well with the other flavors in the dish and the bacon seemed like a pancetta kind of bacon. The sun dried tomatoes seemed odd at first but when you have them with your dish, you will see how it’s a nice compliment to the meal. The potatoes on the side were tasty, generous and quite filling. This dish as a whole was impressive.

The service here was good. They checked up on us often and even though they don’t do refills they gave me a free one, which was kind of nice. The bill came quickly and the staff was attentive and organized.

There are some vegetarian options on the menu and you can get some salads which can be an option for vegans. The fruit salad and granola dished also make for a healthy choice.

We enjoyed our meal. The place was pleasing, the service was good and most importantly, the food was tasty. A pleasant experience overall. I am kind of disappointed that we have to pay for refills which adds to the overall cost. Although, the bill was decently priced for that part of Laurier which can often demand an extra dollar or two. Part of me wanted to see something creative using the BBQ chicken they are so well known for. I like that creativeness when it comes to menus. Granted, chicken early in the morning is not on most peoples minds, but it would nice to give it a try.