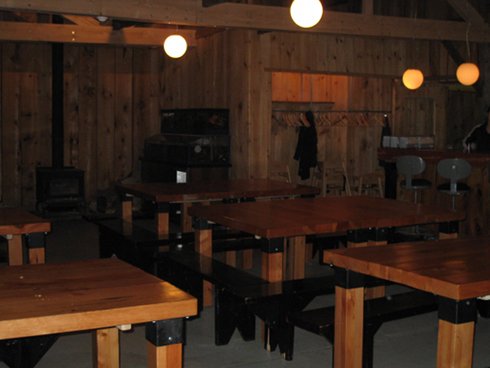 So as winter winds down, people start to breathe a sigh of relief; days feel longer, the fear of waking up to 20cm of snow is ebbing. So that means one thing: that’s right, Pied De Cochon Cabane à Sucre. If you aren’t familiar with the Pied de Cochon Cabane à Sucre, it’s a foodie’s dream come true. This dream is made up of a few ingredients, one part being foodie hero/saint aka Chef Martin Picard, add a generous portion of foie gras, some maple syrup, some duck, a little bit of meat pie, and 20 hungry people all ready to experience a culinary delight.

I should note that this is our 3rd visit to the PDC Cabane à Sucre and it is a much a culinary roller coaster as it is an emotional one. One the culinary side you just eat so much food, and it’s incredibly creative and delicious. In many cases you need to be rolled out and take a very long nap after. On the emotional side, there is so much pent up feeling leading up to this event; elation and excitement when you arrive, and sadness and concern when you leave. The concern is that you don’t know if you will get reservations for next year. For those who don’t know, you can’t drive up there and ask for a reservation that same day, week or month. In fact, you need to do this near the tail end of the previous year. It’s really that popular and delicious; I mean, we had 3 people who came all the way from Toronto just to experience the magic. 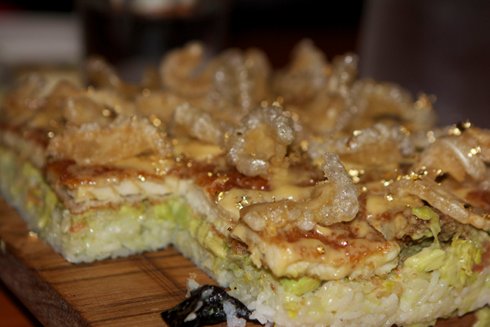 So now that we have a little background on PDC Cabane à Scure, let’s roll up our sleeves and dig in. Since I reviewed it last year I’m going to focus a little more on the dishes themselves than on the overall. To be honest, this is the one place where I don’t care how the service is, I’m just happy to eat. Note that the vegetarian section I have doesn’t really apply since if you are a vegetarian or vegan this may not be the place for you. Right off the bat the Pied De Cochon Cabane à Sucre is not your normal sugar shack. The food is different, the culinary philosophy inspired by traditional Quebec dishes, but the ingredients are far from what people had way back.

The price is $57 for anyone above 12, $20 for those 12 and under, and free for kids under 3. This is $3 more than last year’s price, and there is still the add-on option of a meat pie for $20, although it is quite large so you can easily share it. We were two tables of 10, and bought one meat pie for each table at $2 a head. It was easily shared, with everyone getting a large and filling slice.

To begin with we had a serving of picked herring and maple syrup, a plate of sweetbreads, foie gras, and black pudding. They also brought out the sturgeon fried cake. These dishes were small little starters but with explosive flavour. The presentation wasn’t nearly as dominating as the other ones, but the taste was out of this world. I would say that the pickled herring in maple syrup was the most impressive; the look of this plate was understated but I kept going back for more. 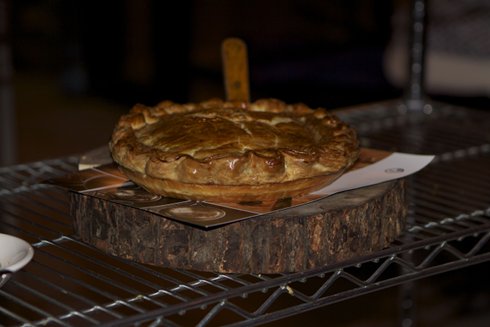 The meat pie made its appearance at around this time. I know it is an add-on for $20, but divided among 10 people it’s a steal and is extremely filling. This dish as well is a silent killer, it looks small an unassuming but it is jammed packed with meat and will make any carnivore happy. 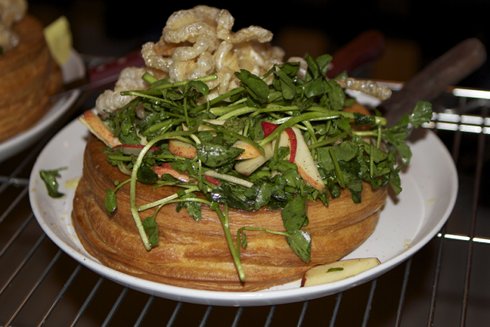 Next up came two of the most intimidating dishes, and my personal favourites. In one corner is the foie gras salad which does have some of the usual salad aspects which may trick any vegetarian, but beware, it is a trap as inside are very generous pieces of foie gras. This dish was delectable and rich, and I had to slow down after this since my taste buds were being overwhelmed by the experience, but once I caught my breath, I kept eating. 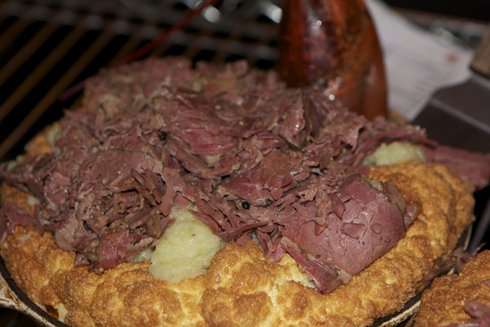 In the other corner was its tag team partner: the lobster and smoked meat soufflé. One would not think that smoked meat and lobster would compliment each other, but you have these two distinct flavours that work happily together to provide a knock-out punch combination of taste and fillingness. The lobster pieces in this dish were also generous in size and quantity, and some of us even had fun with the lobster shell used as decoration.

So at this point some of us are getting up for air, or a small walk, because Martin Picard’s creations have taken a toll; the troops are getting thinned out but their spirits are still strong. So this is when they roll out the big guns. I mean, we’re already fully tired, so why not send in three more heavy hitters. 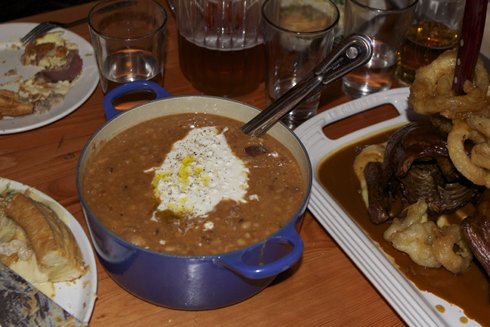 So out comes a large pot of beans and duck legs, and I recall some cream in there as well. This was enough on its own, but they also brought in a large portion of pork sides on a bed of potatoes and cabbage, just to make you think it’s healthy and light. Once you bite into those juicy slices, however, you forget everything. 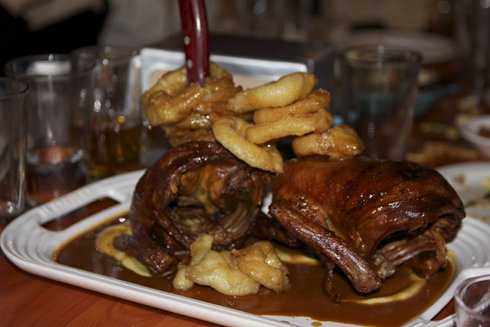 There was also a third member to this group, and that’s the roasted duck with a knife jammed in it, and large onion rings around the handle. The duck was delectable and the only thing we left was the bones. Fortunately, we had some expert meat carvers with us to assure minimal waste. 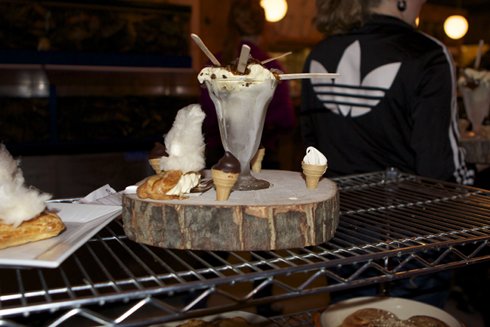 So just to wrap things up, next comes the desserts. At this point I no longer know what I’m eating, but I do know that it’s good. There was a sundae glass with ice-cream and maple syrup taffy, there were tiny little ice-cream cones filled with more taffy, pancakes in duck fat, and these cinnamon roll looking buns which even the athletes among us could not finish.

So overall this was huge success. We were all happy and I am sure all of us and more will be ready to go again next year. I sometimes wish that some restaurants add brunch as a regular menu offering, and, to be honest, Pied De Cochon is top of my list. This experience is a foodie’s dream come true. The price is more than your average cabane à sucre, but you get something you do not get anywhere else. Think of what $57 gets you at a regular restaurant, and it doesn’t even come close; I mean, we had three people drive in from Toronto just for this. So yes, it’s that good.