La Fabrique – Where meal ideas are made daily

A while ago a friend of mine told me about this place called La Fabrique where the interior is almost as interesting as the food. With its constantly changing menu and interesting and funky approach to cooking combining different flavours and styles, I felt that this would be an interesting place to check out their brunch as well as the main courses. Now, brunch is only offered once a week on Sundays and this makes it difficult for me since I don’t always have time for brunch on Sunday but somehow it happened this week and I had an opening. Unfortunately, it came a day after an article in the gazette had appeared about the place (I knew I shouldn’t have waited all that time). Not to be deterred by not being one of the first ones to write about I was still committed to going and off I went in search of a culinary adventure. 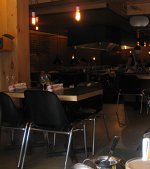 When you walk in you see an open concept kitchen in the middle of the room. It’s a large room with ample seating and slightly different dinning areas with some traditional tables and others a little more bar style. There’s a wine list written on this translucent plastic wall done up in white marker which is kind of cool, and the interior looks as if it’s a combination of finished and unfinished construction. You will notice visible cement blocks on the walls as well as nice finished wood beams. This funky look makes the place quite unique. The moment we walked in we were asked if we had reservations and all I could think of is “Do you actually need reservations at 10 A.M. ? “ Well we did not and it wasn’t a problem but if you go keep that in mind, and if you’re a large group then at least now you know to make reservations.

I should note that the article In the Gazette by Sarah Musgrave (who I am a huge fan of and one day would love to meet, preferably over brunch) refers to La Fabrique as serving up Nouveau brunch. This to me is on the lunch side of the brunch spectrum and although I do respect her work and am happy that this article did add new places for me to check out I am not a fan of “nouveau brunch” or as I like to call it a misspelled lunch. The purpose of this review is not to address nouveau brunch (I will likely write about this later on) but rather to fairly review La Fabrique and like any plate I raise my knife and fork to I will review it with fairness and hunger.

Now the menu is different every week so even if I review something now don’t expect to see it when you go there. In fact, we got there at 10:30 a.m. on the nose and they had not printed it yet and by printed I mean handwrote it and photocopied it. I like the fact they change things up because it keeps it from being boring and predictable. I just hope that if they get an amazing dish they will at least keep it there because great food should be shared (unless I’m eating it then don’t blink or its in my stomach). The menu was priced between $5 to $16 and had 12 items with only two of them being “breakfasty.” These included Scandinavian pancakes and the Pain Perdue which is kind of like a giant French toast. They had other items like a pot of creamed corn ($10) which was enough for two people; soup with fresh peaches and cream ($8.00); poutine galbaude with salad ($13); and quiche with tomato, mozzarella and scallops ($15). This should give some kind of idea of what the menu is like and as you can see it is definitely more lunch than brunch.

My friend went for the lunch route and had a marinated salmon with foccacia, and spring rolls ($12.00). The presentation was spectacular and showed that La Fabrique does take time and effort to make something as pleasing to the eye as it is to the stomach. The salmon piece was of a fair size and was fresh. More importantly, the spring rolls were not fried and were out-of-this-world in the taste department. They had this hint of an herb that none of us could figure out but it was the best spring roll I have ever had. I went the more traditional route and had the Pain Perdue ($10) which came with a giant piece of French toast, pork, warm apples and cream. My mouth still waters with the thought of how fresh that cream was – it was light and when paired with the apple and was absolutely brilliant. The pork piece as well was very tasty and the giant piece of bread was large, nicely soaked and very filling.

Service was good. They checked up on us and helped explain the menu especially when you consider that the menu titles are not super descriptive (It’s a bistro thing). I like the fact that they put a funky water bottle on your table which makes it easier as opposed to flagging down the waiter or waitress, so kudos for that as well cute idea writing eau de vie on it.

The menu does has some vegetarian items although if you are looking for a more breakfast item and have it be vegetarian there was only one option but that is because the menu was more lunch than breakfasty. If you are looking for vegan then you are out of luck. I should also note that this is based on the menu we had and since they change it every weekend then its possible that when you go, you will see something totally different.It may be a good idea to call in advance to see what their menu is for the day. That way, you can save yourself a trip in case there are no options for you.

The food was truly tasty and fresh, so they did an excellent job there. The décor is inspiring and funky as well. The fact that the menu changes every week makes it an adventure every time you go. On the negative side, there was a lack of breakfast/brunch items with the choices focusing much more on lunch and that is becoming a common trend with many places like this. They tend to be incredibly creative but will shy away from classic breakfast/brunch menu items, but if this rocks your boat then so be it, its just that I’m a touch more old school when it come to brunch. I do think they should try to make some more dishes with roots in breakfast, other places have done it and I am not suggesting copying other places but considering how great the Pain Perdue dish was, it makes me think that if any place can do it these guys can.