As sweet as its name

One of the better known brunch places in the West End, Orange Cafe has made a name for itself not only in NDG but across the city. Now having heard many good reviews of this place I had never actually been so you can imagine my excitement when two of my friend suggested that we go
there. What came after was quite the culinary experience.

Once you walk up to Orange Cafe you wonder what is so special about this place since the front is not that assuming nor is the area in general. The inside is a simple setup of banquet seats and some tables, nothing fancy, although they do have wheelchair access which is a nice touch.

Of all the places I have been to I actually think I like their menu setup the most. They offer a lot of choice where its needed and keep other things simple and interchangeable while at the same time not making their menu a novel. For example, there are 15 (yes, 15) choices of omelettes ($6.50-$10.50) with more than enough options for the pickiest of people. The pancake, waffles and french toast ($9.95-$12.95) all have the same topping options which highlights the fact that toppings on these are not often interchangeable, so why have an extra page of options when one section is more than enough. To begin with, the smoothies ($5.95) here are amazing. I had the mango orange and it was incredibly thick and passing the straw test with its eyes closed, as well there is a peanut butter and banana smoothie that although I did not have my friend did and said it was unlike anything she ever tried. The fruit juice ($4.95) has mix options of more than 1 flavor and is freshly squeezed. The warm apple French toast ($8.95) was thick and came with 3 slices the taste was knock out and the price for 3 slices was a deal, I should also note you can get raisin or challah bread for an extra dollar. The Banana Pancakes ($8.95) also came as 3 pieces and were thick and tasty, although the warm apple stood out. We also has a roast beef burger which works quite well and was really delicious which I was quite surprised with. They also have a kids menu for children under 10 the prices are 4.59-5.95, I was unable to order from that menu on account of being over 10 years old but I’m sure it would be good.

The staff was quite nice and informative although we did have to while for our food. Apparently, the service is a touch on the slow side which is not the end of the world as long as you have a drink and good company.

There were some vegetarian option. In fact, most dishes did not seem to be loaded with meat and with 15 choices of omelettes you will have a wide variety of options

You should make sure to check out Orange Cafe – the portions are generous, the options plentiful and price are fair not to mention the smoothies are out of this world. As well, the fact they have wheelchair access is a big plus in my books. The only thing is that there can be a bit of lineup so showing up earlier rather than later may be a good idea although you will likely only wait 5-15 minutes depending on the size of your group. 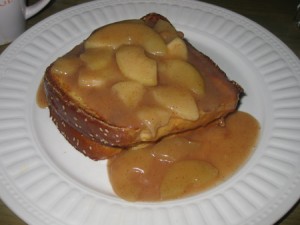 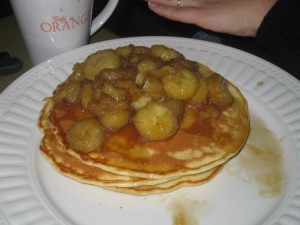 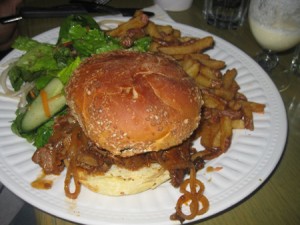